6 WiFi Secrets You Should Know

If there is one area that Gamma Tech Services leads the market, it is WiFi networking. In fact, several of our competitors have contracted us to install and debug their WiFi networks when it exceeded their abilities. Our expertise was further affirmed by our contract with Summit Broadband in which they relied on our expertise to advise about 1000 Pelican Bay residents in Naples on how to get full WiFi coverage in their homes.

Reality is that there are only a few WiFi “secrets” that need to be known to deploy a powerful WiFi network.

1. WiFi range is ultimately not determined by the router or access point but instead by the FCC. The FCC are the ones who set the power limits of wireless devices including the WiFi in your home. They govern this as there is only so much bandwidth available and they want to prevent your neighbor from creating a WiFi that takes up all of the bandwidth in your area. In the end, it’s a good thing, but the result is that manufacturers are severely limited in the range that they can provide. The lesson? Although there are devices with poor range, the better quality devices will all share a similar range performance and it shouldn’t be a deciding factor in which device you purchase.

3. There are only 3 channels of 2.4ghz WiFi and even that may be generous. This topic gets messy quick, but the moral of the story is that WiFi has 11 selectable frequencies in the 2.4ghz band allowed by the FCC, but to achieve faster speeds, most WiFi devices use multiple neighboring channels at the same time. The result is that there are only 3 channels (1, 6, and 11) that do not have any overlap. The 5ghz band uses multiple frequencies at the same time too, but it has many more channels to choose from, making the issue far less problematic.

4. WiFi interference is easier to understand when you compare it to sound waves and conversations in a crowded room. The more people you put in a room, the more difficult it becomes to hear and focus on a conversation. At the same time, the closer you are to someone in a crowded room the easier it is to hear them. And finally, it’s very difficult to hear through walls or other solid objects. These principles can and should all be applied when designing a WiFi network. If you attempt to put too many access points in a space, you’ll just cloud up the frequencies with interference but the biggest determining factor of your speed and reliability is your proximity to the closest access point. Therefore, you must balance these two facts. Finally, understand that walls are the antonym of WiFi and that even the most powerful access points won’t go through them and yield 100% connection speeds.

5. WiFi operates mostly in the 2.4ghz band along with your cordless phone, Bluetooth headset, wireless camera, microwave oven, car alarm remote, and plenty of other devices. Needless to say, your WiFi doesn’t just compete with neighbors WiFi or other access points in your own network, but also hundreds of other devices that use the 2.4ghz band. The best way to use this information is to understand that WiFi interference is a very complicated subject and the closer you live to your neighbors, the more this holds true. Plan accordingly and remember, the closest device wins.

6. 5.0ghz is a mixed bag. Yes, it doesn’t suffer from nearly as much interference as 2.4ghz, but it also can’t penetrate objects as well as 2.4ghz. This is combined with the reality that not every device supports 5ghz meaning that even if you use 5ghz, you still must accommodate the 2.4ghz band. In the end, 5ghz makes many promises it simply can’t keep and 2.4ghz will be here to stay for quite some time.

WiFi is a complex topic that can’t be fully explained in a single blog post, but these 6 truths are probably the most influential in how we design our WiFi deployments.

If you’re looking for WiFi in your home or business, trust the professionals at Gamma Tech Services. No space is too large or too challenging for our team of experts.

Back to Blog
PrevPreviousVoIP: It Rises and Falls on the Network
NextSecurity You’ll Actually UseNext 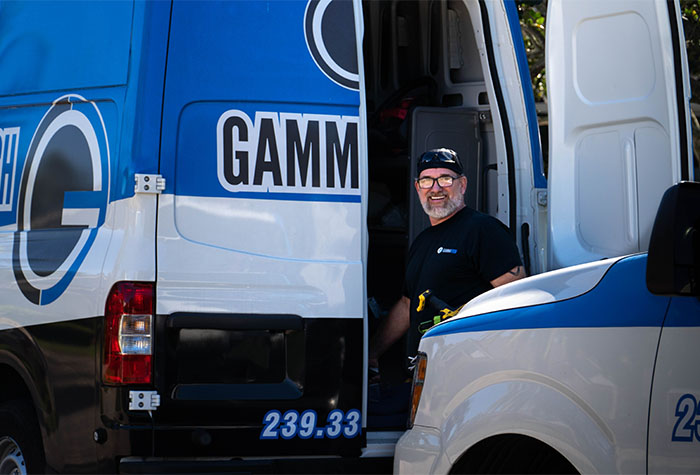 Whether you hire us to do a job or join our team, you become part of the Gamma Family — a company that puts people first and always commits to excellence.
Learn More About Us
Careers

Whether you’re a local resident or business, contact us to learn more about how we can solve your technology needs with our custom-built solutions.

All successful businesses and franchises require reliable, standardized IT and communication systems to manage customer service and operational workflow. No matter if your business is

Technology changes at a lightning fast pace and can be both challenging and time-consuming.  Many businesses assume that the only option for network management is

Inside A Smart Home

Automating your home is fun and exciting, and the possibilities are limited only by your imagination. Here are some of the options available for how